Letter to the Editor: “The effect of abolishing instructions to fast prior to contrast-enhanced CT on the incidence of acute adverse reactions”

We read the article entitled “The effect of abolishing instructions to fast prior to contrast-enhanced CT on the incidence of acute adverse reactions” written by Tsushima Y et al. with great interest [1].

Recently, in our institution, which is a large hospital in the Tohoku region of Japan, we deferred the decision of applying generic drugs because the injectors were not guaranteed to be compatible with all generic pre-filled syringes. According to the injector’s package insert, unspecified pre-filled syringes should not be used because flow rate accuracy and alarm function are not guaranteed and may also cause medical accidents [3]. A brief scheme could help getting the key point from this issue (Figure). 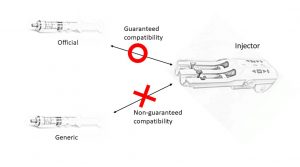 Disclaimer
While the authors are associated with the Japan Radiological Society, the views presented in this paper are the authors’ personal opinions, and not the society’s official view.